Bringing Sexy Back Into Your Yards

Elm trees are a beautiful addition to any landscape. With their large, shady canopies and rounded green leaves, elms are a stately and elegant tree and very popular in North America. Unfortunately, elms are also the favorite food of the elm leaf beetle – and Sexy Trees has been seeing quite a lot of trees with elm leaf beetle infestations in recent months. These pesky insects can cause significant damage to elm trees if left untreated.

In this blog post, we will discuss how to identify elm leaf beetles and provide tips on how to get rid of them.

The elm leaf beetle feeds heavily on elm trees in both its adult and larval forms, so it’s essential to be able to identify this pest at every stage in its life cycle. Photos by Colorado State University. 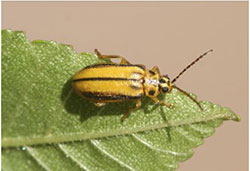 Adult elm leaf beetles are yellow or olive-green and have a black stripe on each wing. They also have several dark spots behind their head. These beetles grow to about six millimeters or just under a quarter of an inch long. 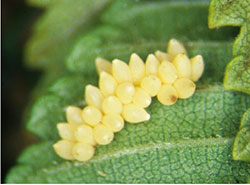 Elm leaf beetles commonly spend winter in sheds or other sheltered locations in cold climates. They emerge in the spring and deposit eggs in clusters of 15 to 20 on the undersides of leaves after feeding for a few weeks. These eggs are oblong and yellow and hatch seven to ten days later. 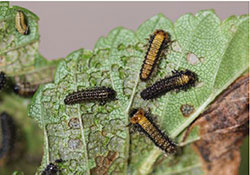 The larvae are tiny and black with yellow stripes running down their backs. They mature in about four weeks and then pupate into adults. The entire life cycle from egg to adult takes about six to eight weeks.

Elm leaf beetles typically infest elms that are already stressed or unhealthy. This is because these trees are more likely to produce a chemical that the beetles find attractive. Signs of elm leaf beetle infestation include:

If you notice any of these signs on your elm trees, it’s time to take action. Keep reading to learn how to get rid of elm leaf beetles.

Getting Rid of Elm Leaf Beetles

You can use several methods to get rid of these elm-devouring pests.

You can use chemical insecticides, such as pyrethroids or neonicotinoids. These products should be applied when the beetles are actively feeding, typically from late spring to early fall. Be sure to follow the instructions on the label carefully, as these products can harm humans and animals if misused.

Unfortunately, there are very few natural predators of the elm leaf beetle. Predators such as predaceous stink bugs and plant bugs may feed on the beetle in various stages of its life cycle, as may parasitic wasps. A fungus called Beauveria bassania may also kill these beetles in the pupae stage.

Related Reading: How Do I Know When a Tree is Sick?

If you have elm trees on your property, the best way to prevent elm leaf beetle infestations is to keep your trees healthy. This means watering them regularly, fertilizing them as needed, and pruning them to remove dead or dying branches. Additionally, you can use physical barriers such as insect netting to prevent the beetles from accessing the tree’s delicate leaves.

If you suspect an elm leaf beetle infestation, the best course of action is to contact a professional pest control company. Our experts at Sexy Trees can help you get rid of these pesky pests and protect your elm trees from further damage.